Tunku Abdul Rahman Putra Al-Haj ibni Almarhum Sultan Abdul Hamid Shah (1903-1990) was the Chief Minister of the Federation of Malaya in 1955, and became the first Prime Minister of Malaya in 1957. He was instrumental in the creation of Malaysia and became its first Prime Minister in 1963. He stepped down from office in 1970. He was affectionately called "Tunku" and is known as the "Father of Independence" and "Father of Malaysia”.

Became the first Prime Minister of Malaysia in 1957

Known as “Father of Independence”

Remembered as the "Father of Independence", Malaysia’s first Prime Minister, Tunku Abdul Rahman Putra Al-Haj, had recognised the vital importance of fostering cooperation among Malaysia’s various ethnic groups as a way to overcome political challenges. The seventh son of the 25th Sultan of Kedah, Sultan Abdul Hamid Halim Shah, and Che' Menjalara, Tunku contested - and won - the Presidential elections of the United Malay National Organisation (UMNO) in 1951. As UMNO President, he established a political coalition with the Chinese and Indians, resulting in the birth of the coalition that is now known as the National Front (Barisan Nasional). Tunku led the negotiations for independence, and on 31st August 1957, the Federation of Malaya declared its independence from the British, without a drop of blood being spilled. It was also Tunku who envisioned the idea of Malaysia - a federation of Malaya, Singapore (which later seceded in 1965), Sabah, and Sarawak which was established on 16th September, 1963. Tunku is also recognised for his elevation of Islam to the status of official religion and he was instrumental in the setting up of the Organisation of Islamic Conference in 1969, of which he was the first Secretary-General. It can be said that Tunku Abdul Rahman’s greatest single achievement was in giving Malaysians a sense of pride and nationhood.​ 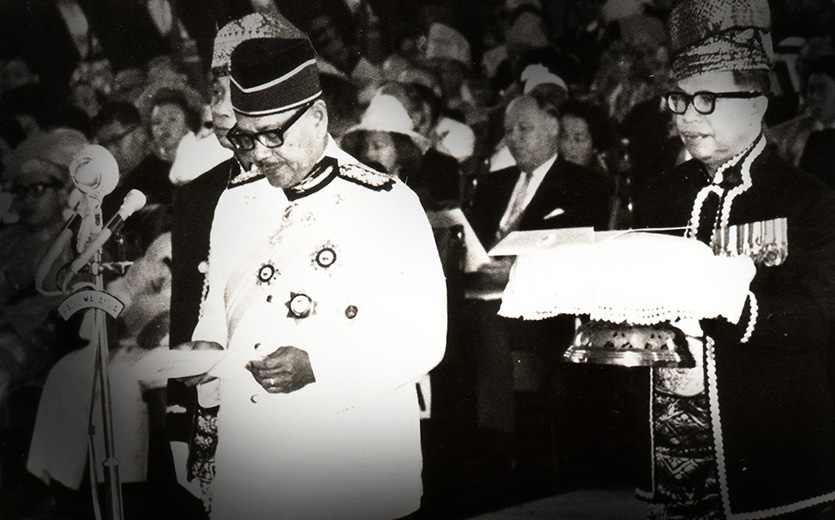 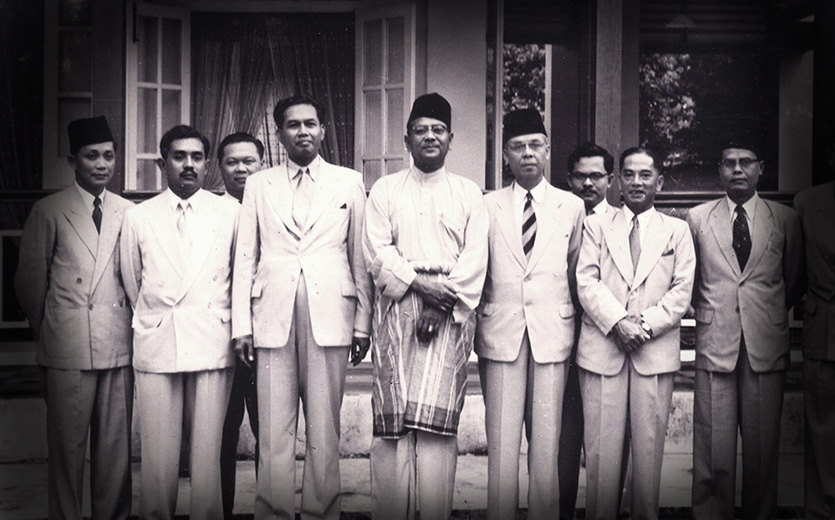 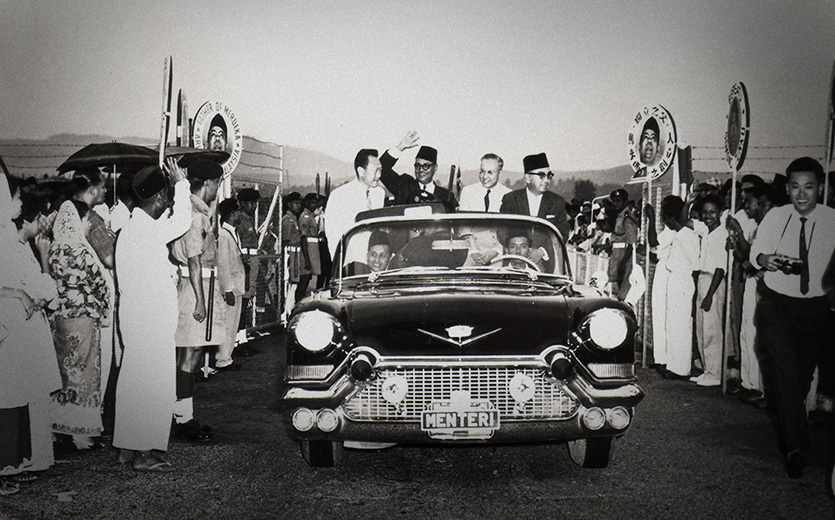 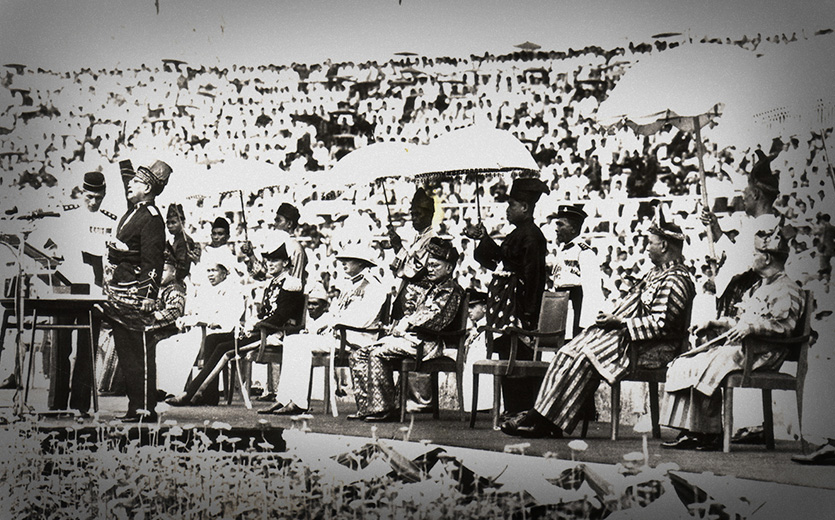 Tunku was born on February 8, 1903 in Alor Setar, the capital of the state of Kedah. He is the seventh prince of Sultan Abdul Hamid Shah, the twenty-fifth Sultan of Kedah, and Che Manjalara. Said to be a robust and bright boy with a particular fondness for sports, Tunku received his early education at the Debsurin School, Bangkok and Penang Free School.

On a Kedah Government scholarship, he went on to study at St. Catherine's College, Cambridge University, where he received his Bachelor of Arts in law and history in 1925. A first-hand experience in racial discrimination with the college's administration was said to have intensified his conviction in fighting for equality and ignited his desire in making his homeland an independent nation, free of British colonialism.

His leadership flair also unfolded in England. Realising the Malay students there were not represented by any organisation, he established the Kesatuan Melayu Great Britain (Malay Association of Great Britain) and became its first secretary.

After returning home, he joined the Kedah Civil Service as a cadet in the Legal Advisor's Office, and then as a district officer in several Kedah districts. He proved unpopular among some British officials thanks to his outspokenness and tendency to introduce reforms in his quest to improve the living standards of the people.

He left for England again to study and sit for his Bar examinations. His attempt at completing his law studies at the Inner Temple in England in 1938 came to a halt due the outbreak of the Second World War. Tunku returned to Malaya and only resumed his studies eight years later. He finally qualified as a barrister in 1949.

The political awareness he gained while making friends with people from various nations in England did not go to waste, when he was made chairman of the United Malays National Organisation (UMNO) soon after his return. On August 26, 1951, Tunku became the UMNO President succeeding Dato' Onn Jaafar. He travelled all over the country meeting people from all walks of life to promote unity, especially racial unity. His efforts in overcoming the country's political problems by way of cooperation among the various ethnic groups saw the birth of the Alliance Party in 1955.

Under his leadership, the Alliance won the country's first general election in July 1955. Tunku was then appointed the country's Chief Minister and Minister of Home Affairs.

In 1956, he led a mission to London for a discussion with the British government on the independence for Malaya. The meeting resulted in the signing of the Independence Treaty at Lancaster House in London on February 8, 1956, that led to the independence of Malaya on 31st August, 1957. Tunku then became the first Prime Minister of Malaya, and led the Alliance to victory in the 1959, 1964, and 1969 general elections.

He loved football and horse racing. Under his initiative, "Pesta Bola Merdeka" was born in 1957 which led to his appointment as the first President of Asian Football Confederation (AFC). "Whatever the sport, I was a very keen sportsman. I have always been an outdoors man, a lover of all the wild things in life,” he said.

Tunku was married three times. With his first wife, Meriam Chong, Tunku was granted two children: Tunku Khadijah and Tunku Ahmad Nerang. Meriam Chong, however, died of a malarial infection not long after giving birth to Tunku Nerang. Tunku later married to his former landlady, Violet Coulson, who he met when he was studying in London. Tunku's marriage with Violet, however, did not receive his family’s blessing, and the marriage ended in divorce around two years later. In 1939, Tunku married Tun Sharifah Rodziah, the younger sister of Syed Omar Barakbah, Tunku's college friend when he was studying in London. Tunku and Tun Sharifah did not have a child together, but they adopted three children: Faridah, Sulaiman, and Mariam.

On 6 December 1990, at the age of 87, Tunku Abdul Rahman Putra Al-Haj died at the Kuala Lumpur General Hospital. Members of the public paid their last respects at Parliament before his remains were flown to Alor Setar. Tunku was given a Royal funeral at the Balai Besar in the presence of the Sultan and Sultanah of Kedah before being buried at the Royal Mausoleum, Alor Setar. His death was a huge loss to all Malaysians and his contribution to the nation will always be remembered.

Unity
Tunku has succeeded in establishing a political co-operation through the Alliance Party that combines UMNO with MCA in 1952, followed by the MIC in 1954. This political co-operation contributed to the unity of races in the newly independent plural country, where every race was represented at the federal level.

National Security
Malaya faced a strong internal enemy in the form of the armed Communist Party of Malaya (CPM) headed by Chin Peng. A state of emergency was proclaimed in 1948 following the assassination of three British estate managers by the CPM. In 1951, CPM killed Sir Henry Gurney, Governor of Malaya.

Various attempts were made to defeat communist threats including banning the CPM, and transferring the Chinese population to new villages to prevent them from voluntarily or involuntarily helping the communists. On 24 December 1955, a meeting was held with the CPM in Baling, Kedah. The meeting was led on the government's side by Tunku Abdul Rahman, accompanied by Tun Tan Cheng Lock as MCA President and David Marshall as Chief Minister of Singapore. The communists were represented by Chin Peng as chief of delegation, Rashid Maidin, and Chen Tian.

Negotiations failed as the CPM insisted on being recognised as a legitimate political party, a request rejected by Tunku Abdul Rahman. Chin Peng was not allowed to return to Malaya, and the emergency ended on July 31, 1960.

International Relations
Overseas policy is important in promoting friendship and regional cooperation and outside countries. Tunku Abdul Rahman adopted the charter of the United Nations and also positioned Malaysia as a neutral country.

"I am indeed proud that on this, the greatest day in Malaya's history it falls to my lot to proclaim the formal independence of this country. Today as a new page is turned, and Malaya steps forward to take her rightful place as a free and independent partner in the great community of nations, a new nation is born, and though we fully realise that difficulties and problems lie ahead, we are confident that, with the blessing of God, these difficulties will be overcome and that today's events, down the avenues of history, will be our inspiration and our guide." - August, 1957

"Let us in this hour of our triumph remember those who have given their lives to enable us to enjoy ours, and let us thank those who are even at this hour spending their time in the jungle, so that we can peacefully celebrate our Merdeka. Let us always remember with gratitude what is being done by the members of the Security Forces whose valour and service to the country have helped to make large areas in this country "white", and people free to go about their business without restriction. The first anniversary of our independence is indeed a memorable one, and I pray that it will be the same next year and all the years after. To those people who have given their co-operation in the service of this country, I say the nation owes you a debt of gratitude. Let this country be an example to the rest of the world on how the various people of different races, with different creeds can live as one people, at peace with one another for the good of all. To Allah we give thanks for the blessings which we now enjoy."

"But while we think of the past, we look forward in faith and hope to the future; from henceforth we are masters of our own destiny, and the welfare of this land is our own responsibility. Let no one think that we have reached the end of the road: Independence is a milestone, but it is only a threshold to high endeavour - the creation of a new sovereign state. At this solemn moment I call upon you to dedicate yourselves to the service of a new nation, inspired by the ideals of justice and liberty - a beacon of light in a disturbed and distracted world."
- Merdeka Stadium, Kuala Lumpur. 31st August 1957

"I believe in allowing the people to have their ways so long as they observe the law and order of the country. I believe in allowing them to run their own life and to enjoy the fruits of their labours; let them wear what they want, let them do what they want to do, go where they want to go. I do not think it is right to order their way of life."
- Kuala Lumpur, 28th August 1957

"To the youth of this country, I have a message. You have a wonderful future ahead of you. Unlike us, you have a country free from any domination. You grow up heads held up high as masters in your own country. The future of this country rests on your shoulder; whether your star rises or fall, it is up to you. Therefore, be ready to serve her, to build her up, and to give your life to defend her."
- Kuala Lumpur, 30th August 1957