Tun Hussein Onn was Malaysia’s third prime minister, leading the country from 1976 to 1981.  He was renowned for emphasising the issue of unity through policies aimed at rectifying economic imbalances among the races. For his efforts at promoting goodwill among the country’s various communities, Tun Hussein Onn is remembered as the "Father of Unity".

On January 15, 1976 he was appointed as the prime minister of Malaysian

Known as “Father of Unity”

Introduction
Tun Hussein Onn was born on 12th February 1922 to Johor’s Chief Minister, Dato’ Onn Jaafar, and Datin Halimah Hussein. The Johor Bahru-born received his early education in Singapore, and later at the English College in Johor Bahru. Tun Hussein Onn was renowned for emphasising the issue of unity through policies aimed at rectifying economic imbalances among the races. These included the launching of the National Unit Trust Scheme (Amanah Saham Nasional). In 1976, Tun Hussein launched PEMADAM, a national organisation dedicated to combat drug abuse. He also highlighted the importance of Rukun Tetangga in its role in maintaining peace and harmony of the Malaysian community. He also dedicated his tenure as Prime Minister to creating a culture of discipline, purpose, and integrity. He hated corruption, and likened it to a disease which must be wiped out “before it becomes cancerous”. For his efforts at promoting goodwill among the country’s various communities, Tun Hussein Onn is remembered as the “Father of Unity”. 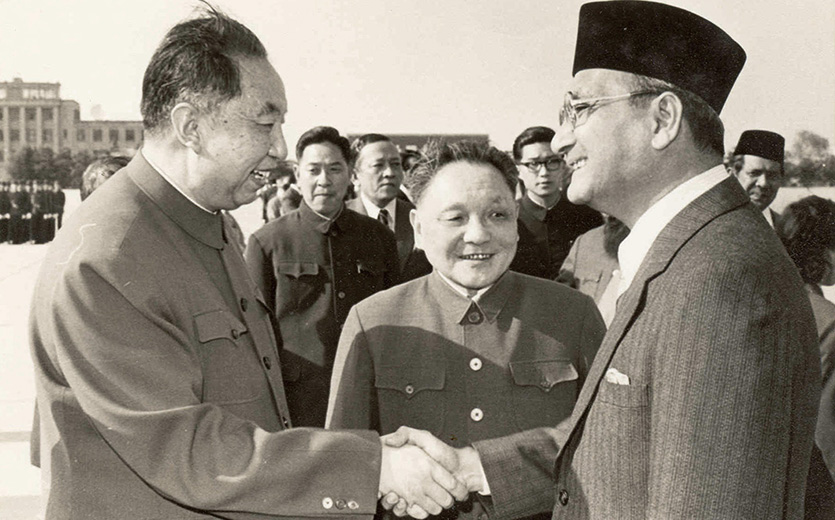 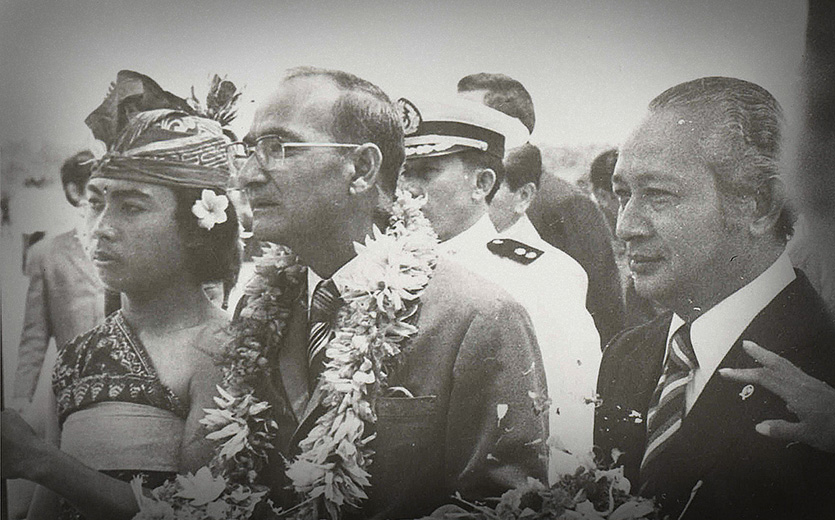 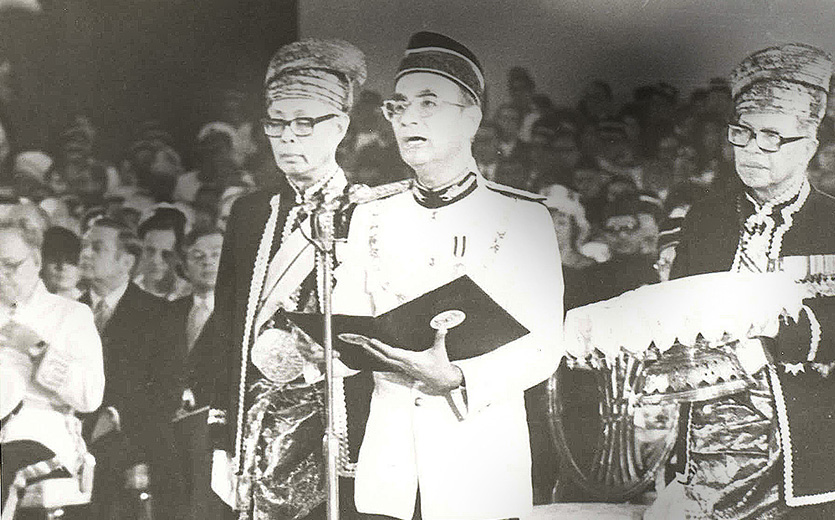 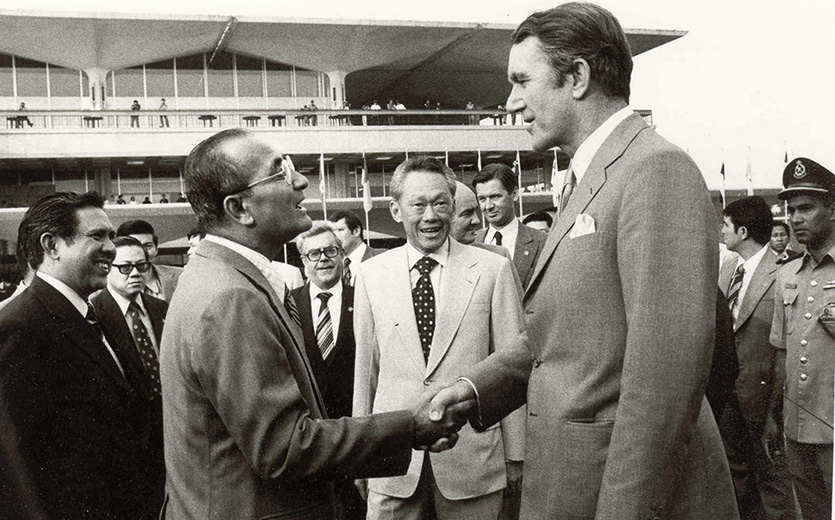 He was born in Johor Bahru, Johor on February 12, 1922 to Dato Onn Jaafar and Datin Halimah Hussein.

He received his early education in Singapore and at the English College in Johor Bahru. After leaving school, he joined the Johor Military Forces as a cadet in 1940 and was sent a year later to the Indian Military Academy in Dehra Dun, India. Upon completion of his training, he was absorbed into the Indian Army and served in the Middle East when the Second World War broke. After the war, his vast experience prompted the British to employ him as an instructor at the Malayan Police Recruiting and Training Centre in Rawalpindi.

Tun Hussein came back to Malaysia in 1945 and was appointed Commandant of the Johor Bahru Police Depot. The following year he joined the Malaya Civil Service as an assistant administrative officer in Segamat, Johor. He was later posted to the state of Selangor, becoming Kelang and Kuala Selangor’s district officer.

Tun Hussein, who came from a family with deep nationalistic spirit and political roots, resigned from the civil service to go into politics. In 1949, he became the first youth chief of UMNO (United Malays National Organisation), a party his father helped established. In 1950, he was elected the UMNO secretary general. Tun Hussein however left UMNO in 1951 to join his father in forming the Independence of Malaya Party (IMP).

With IMP losing momentum, Tun Hussein went to London to study law at Lincoln’s Inn, qualifying as a Barrister-at-Law. He came back as a certified lawyer and practiced in Kuala Lumpur.

Tun Hussein returned to politics in 1968 after being persuaded by Prime Minister Tun Abdul Razak to rejoin UMNO. He stood in and won the general elections in 1969 and was then appointed as the education minister. Tun Hussein’s meteoric rise continued when on August 13, 1973 he succeeded the late Tun Dr Ismail as the Deputy Prime Minister. On January 15, 1976 he was appointed as the prime minister of Malaysian after the passing away of Tun Razak.

Tun Hussein is renowned for stressing on the issue of unity through policies aimed at rectifying economic imbalances between the communities. For instance, April 20, 1981 saw the National Unit Trust Scheme being launched. He also gave serious consideration to the concept of Rukun Tetangga and the fight against the drug menace.

Tun Hussein, who was married to Toh Puan Suhaila Tan Sri Haji Mohd Noah, underwent a coronary bypass in early 1981. On July 17 the same year, he retired from active politics and relinquished his prime minister post due to health concerns. He passed away on May 29, 1990 at the age of 68.

Tun Hussein Onn was Malaysia’s third prime minister, leading the country from 1976 to 1981.

Reading was his favourite pastime since his youth and he once said, “I love to read books on politics, sometimes war stories. However, I am not very interested in books on love stories”. He was also known for his meticulousness. Dr. Zainah Anwar (NST, 1981), in her article “Hussein – The Inside Story” wrote, “It’s common knowledge that he goes through all his speeches and important papers with a six-inch ruler to ensure that he does not miss out the important points, which he then proceeds to underline with a red pen.”

Racial Unity
As Prime Minister, Tun Hussein Onn made sure the issue of national unity remained at the forefront of the government’s political, economic, and administrative actions. The National Unity Council was formed in 1974 to nurture love for the nation among the country’s different racial communities, based on the principles of Rukun Negara, and to improve the relations between the public and the governments. Believing language to be a strong unifying tool, Tun Hussein elevated the status of Bahasa Malaysia by making it the medium of instructions in the national education system, and making a pass in the subject a requisite for passing the Malaysian Certificate in Education (MCE) examination.

Pemadam
In 1976, Tun Hussein launched PEMADAM, a national organisation to combat drug abuse, which he regarded as one of the biggest obstacle to national development.

Peace & Harmony
Stressed the importance of Rukun Tetangga and its role in maintaining peace and harmony in communities.

“It is rightly said that to be a good general, one must first be a good soldier. A bad soldier can never be a good general. One must learn to obey before one can give commands. I have not made my grade and become a general. The most that I have been able to achieve is to be a Prime Minister.”
– Agra, India. 24th January 1979