Tun Dr Mahathir bin Mohamad was appointed as the fourth Prime Minister of Malaysia on 16th July 1981. He served the country for 22 years, becoming Malaysia’s and South-East Asia’s longest-serving Prime Minister. He led the country through a fast-paced modernisation drive that earned Malaysia international recognition as an industrial powerhouse. Under his leadership, several mega infrastructure-projects took place, notably the Kuala Lumpur City Centre (KLCC), PETRONAS Twin Towers, Kuala Lumpur International Airport (KLIA) and Multimedia Super Corridor (MSC). Tun Dr Mahathir opened Malaysia to foreign investments, reduced international trade barriers, privatised government services, as well as established world-class physical infrastructure. During Tun Dr Mahathir’s tenure as Prime Minister, Malaysia became one of the most prosperous and dynamic economies in Southeast Asia, with a thriving industry, growing middle class, and increased quality of life. Malaysia also played a more active role in the international arena, acting as a voice for developing countries in Asia and Africa. Tun Dr Mahathir Mohamad is also remembered for Vision 2020, a framework for making Malaysia a developed nation by the year 2020. For his achievements, he is regarded as Malaysia’s “Father of Modernisation”. In 2016, Tun Dr Mahathir Mohamad set up a new political party to challenge the National Front. In 2018, making a stunning political comeback at the age of 93, the coalition he led won the general elections and he was elected as Malaysia’s 7th Prime Minister. 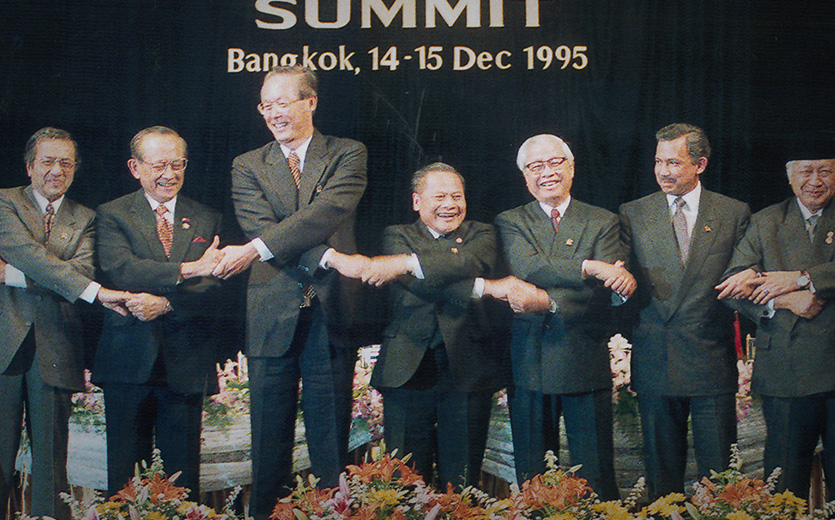 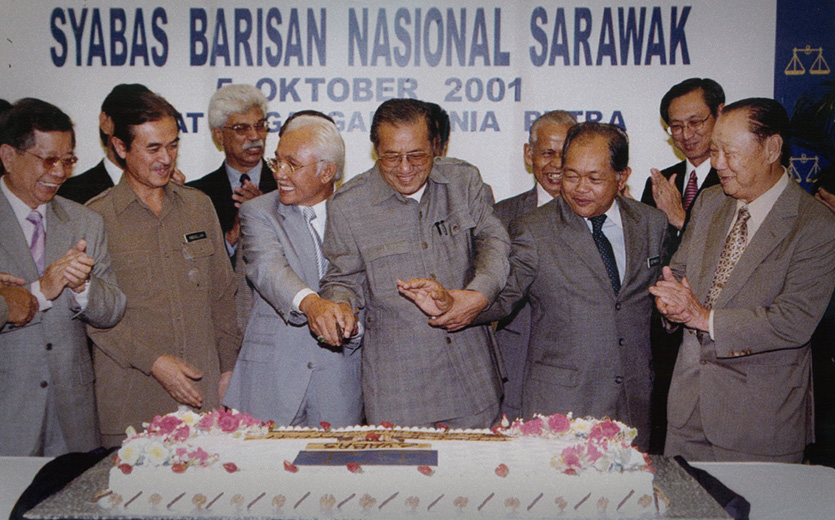 Tun Dr Mahathir was born on 10th July, 1925 (his official birth date is recorded as 20th December 1925) in Kampung Seberang Perak, Alor Setar, Kedah, described by Tun himself as “the poorer quarters” of town. Tun Mahathir’s parents were Mohamad bin Iskandar and Wan Tempawan binti Wan Hanafi and Tun was the youngest of nine siblings.

He received his early education in his hometown, at Sekolah Melayu Seberang Perak, an all-boys school for two years, then in a government English school where his father was the headmaster. This school would later be renamed Kolej Sultan Abdul Hamid. As a student, Tun Dr Mahathir was active in debates and was highly regarded for his English language skills. He was appointed editor of the school magazine, and played in the school’s rugby team.

His education was interrupted when the Japanese launched an incursion into Southeast Asia via Thailand, Penang, and Kelantan, on the 8th of December, days after Tun sat for his Junior Cambridge Examination. Tun attended a Japanese school only briefly, opting instead to help his family by selling food at the nearby Pekan Rabu. After the Japanese surrender, Tun Dr. Mahathir resumed his education at Kolej Sultan Abdul Hamid where his first commentary as editor of the school magazine was on the war and the Japanese.

In 1947, Tun Mahathir gained admission into the King Edward VII College of Medicine in Singapore as a government scholar. During his college years, he wrote for The Sunday Times (now known as The Straits Times) under his pen name, C.H.E Det (Det was his family nickname). Most of his articles were about the problems of the Malays. In 1953, Tun Mahathir graduated and served as a medical officer at Alor Setar General Hospital. While in college, Tun had met Tun Dr Siti Hasmah, also a medical student. In 1956, they were married in a ceremony in Jalan Imbi in KL. They have seven children: Marina, Mirzan, Melinda, Mokhzani, Mukhriz, Maizura, and Mazhar.

Tun left government service in 1957 to set up his own practice, “Maha Clinic”, in Alor Setar, establishing the country’s first Malay-owned private clinic.

Tun Mahathir became active in politics and in 1964, stood for elections in Kota Setar Selatan, and won. In 1965, he was elected to UMNO’s Supreme Council. In 1969, Tun stood for elections again, but this time, he lost to his PAS opponent. The opposition’s win and victory parade in Kuala Lumpur then led to a violent racial clash between the Chinese and the Malays that left almost two hundred people dead. Following the 13th May 1969 race riots, Tun wrote a scathing letter to Tunku, criticising him for his soft approach in economics that Tun felt sidelined the Malays in economic development as it gave free reign to Chinese domination. Because of that letter, he was expelled from UMNO. During his time in the “political wilderness”, Tun continued his private medical practice and wrote his thoughts on the plight of the Malays into a book, “The Malay Dilemma”, which was subsequently banned in Malaya.

Tunku resigned as Prime Minister in 1970, and Tun Abdul Razak Hussein took over. In 1972, Tun Mahathir’s application to rejoin UMNO was accepted. He was appointed Senator in 1973. As he was passionate about education, Tun Mahathir was appointed a Member of the University Court and University Malaya Council. The next year, 1974, Tun contested in the elections and won the Kubang Pasu seat unopposed. He was appointed Malaysia’s Minister of Education, and ended his private medical practice.

In 1976, Tun Dr. Mahathir was made Deputy Prime Minister and two years later, he took on the post of Minister of Trade and Industry where he led several investment promotion missions overseas. In 1981, after Tun Hussein Onn stepped down as Prime Minister due to ill health, Tun Dr Mahathir Mohamad became UMNO’s President and Malaysia’s fourth Prime Minister.
Under his leadership, Malaysia transformed from being an agricultural country to a modern, industrial nation. Tun emphasized a clean, efficient government, and launched the Bersih, Cekap & Amanah campaign (Clean, Efficient, & Trustworthy) to reduce corruption, promote efficiency, and nurture trust in the public service. Other innovations he introduced to the public administration system were to insist that government employees clock in and out each day as well as wear name tags.
In his drive to industrialise Malaysia, Tun established a national car company, PROTON, and in 1982, the company produced its first ever Malaysian-made car, the Proton Saga. He also introduced closer partnerships between government and the private sector through the “Malaysia Incorporated” concept. Tun is also remembered for Vision 2020, a bold vision for the country to attain fully-developed economy status by the year 2020, not just in terms of economic growth but also in terms of education, societal maturity, and governance.

For his contributions to the nation, he is regarded as Malaysia’s “Father of Modernisation”.

Post-retirement, he became Honorary President of the Perdana Leadership Foundation, a non-profit archive and research centre on the leadership, policies, and initiatives of the past Prime Ministers of Malaysia. He was also active in agitating against war, via NGOs he founded – Perdana Global Peace Foundation and KL Foundation to Criminalise War.

His retirement from politics, however, was short lived. In 2016, increasingly disheartened by what he saw as endemic corruption in Malaysia, embodied in the 1MDB scandal that had erupted, Tun Dr Mahathir Mohamad left UMNO for the second time and set up a new political party – Bersatu (United) – to challenge the National Front. His new party joined forces with the Opposition coalition: PKR, DAP, and Amanah, and formed Pakatan Harapan (Coalition of Hope) which Tun led.

In Malaysia’s 14th General Elections, history was made when Pakatan Harapan defeated the National Front. For the first time since Independence, Malaysia had a change of government, and Tun Dr Mahathir Mohamad became Malaysia’s 7th Prime Minister.

In February 2020, his party, Bersatu, made the decision to leave Pakatan Harapan, and Tun stepped down as Prime Minister. As neither the National Front nor Pakatan Harapan had a clear majority, the King consulted with all 222 Members of Parliament. On 29th February 2020, the King declared Tan Sri Muhyiddin Yassin, President of Bersatu, as Malaysia’s 8th Prime Minister. Tan Sri Muhyiddin leads the Perikatan Nasional government, consisting of Bersatu, UMNO, and PAS.

In August 2020, Tun Dr Mahathir Mohamad set up Parti Pejuang Tanah Air or Pejuang (Homeland Fighters’ Party) of which he is Chairman.

Tun Dr Mahathir Mohamad writes regularly on Malaysian issues for his various social media platforms. In 2022, after the 15th General Elections, he announced he would be focusing on writing his thoughts on Malaysian history and current events.

Writing is one of Tun Dr. Mahathir Mohamad’s passions as he started writing while in school, and continued writing articles, books, and now, blogposts, throughout his career (his blog is located at www.chedet.cc).Tun Dr. Mahathir is also an avid reader of fiction and non-fiction. His favourite authors include Wilbur Smith, Dick Francis, and Ken Follett. He also loves horse-riding.

Post-retirement, Tun was appointed Honorary President of Perdana Leadership Foundation, a research and archive centre to document the contributions of all past Prime Ministers of Malaysia. Tun is also President of the anti-war Perdana Global Peace Foundation, and is the Chairman of the Kuala Lumpur Foundation to Criminalise War.

In 2016, Tun Dr Mahathir left UMNO, in protest against Datuk Seri Najib Tun Razak’s leadership, and formed a new political party, Parti Pribumi Bersatu Malaysia (PPBM). In 2017, at the age of 92, he re-entered the political fray, this time as leader of the Opposition pact, Pakatan Harapan.

Chronology
Contributions
Selected Quotes & Speeches
Kemerdekaan kita adalah kemerdekaan yang sebenar, bukan kemerdekaan setengah masak yang mana dasar negara ditentukan oleh orang asing. Rakyat bebas menentukan kepimpinan negara ini dan bukan kuasa luar yang menentunya. – August, 2002 We have to constantly and tirelessly work to strengthen national unity and take immediate action to curb tendencies that could work against the national interest. No one should have a narrow viewpoint and accuse the government of trying to destroy the culture and language of any race. In reality it is only in Malaysia that the interest of all races are safeguarded and financed by the government. – 2003 Corruption is a function of the culture of the people, i.e. their value system. When people have no sense of shame and their greed overcomes their better judgement, corruption just cannot be stopped. No amount of explanation about the destructive effect of corruption would be of any use. – 2009 “The weakness of today may be a strength of tomorrow. A step back today may mean many steps forward tomorrow. Allah is always with us, if only we exert ourselves to help ourselves.” “By all means,  convince us by the power of your persuasion. But do not convince us by the persuasion of your power. Please do not intimidate, please do not impose. Please, for God’s sake, do not dictate. – Singapore, 18th October 1999
Sources
Additional Material