Tun Abdul Razak introduced the New Economic Policy in 1970 to eradicate poverty, and restructure society to address inter-ethnic economic imbalances. He also modernised the agricultural sector and introduced adult literacy classes in rural areas.  For his contributions towards rural and national development, he is known as Malaysia’s “Father of Development”.

Became the 2nd Prime Minister of Malaysia in 1970

Known as “Father of Development”

Tun Abdul Razak, the 2nd Prime Minister of Malaysia, is the son of Dato’ Hussein Mohd Taib and Teh Fatimah binti Daud. He graduated as an Utter Barrister from Lincoln’s Inn, London, and went on to politics after returning to Malaya in 1950. He was appointed as the Deputy President of UMNO in 1951, and joined the negotiations to achieve independence from the British. Tun Abdul Razak later became the Deputy Prime Minister and Minister of Education after Malaya’s Independence in 1957. The New Economic Policy was his brainchild, with the purpose of eventually eradicating poverty, and restructuring society to overcome economic imbalances. Apart from that, Tun Abdul Razak also introduced the Green Book and Red Book, to plan and oversee rural development as well as the growth of the agricultural sector. For his contributions towards rural and national development, he is known as our country’s “Father of Development”. 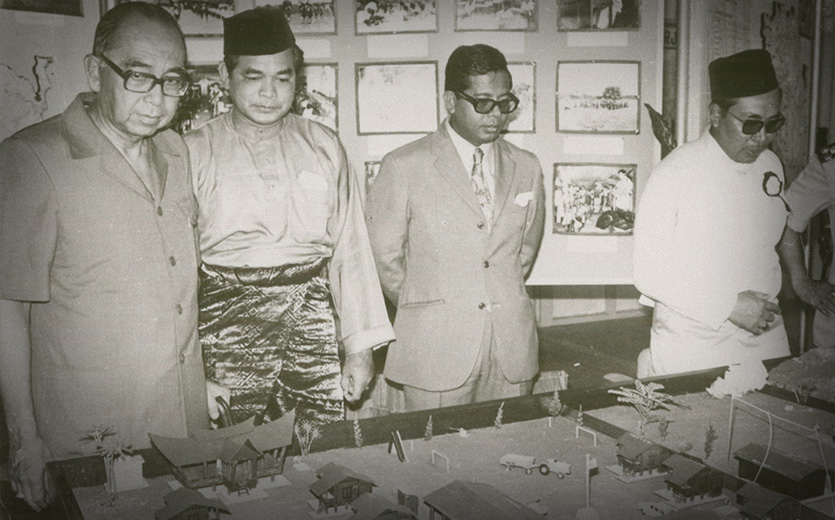 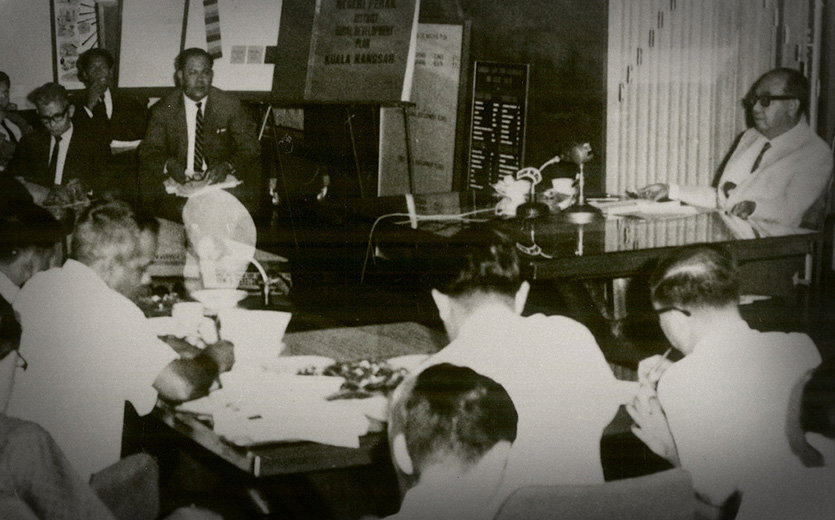 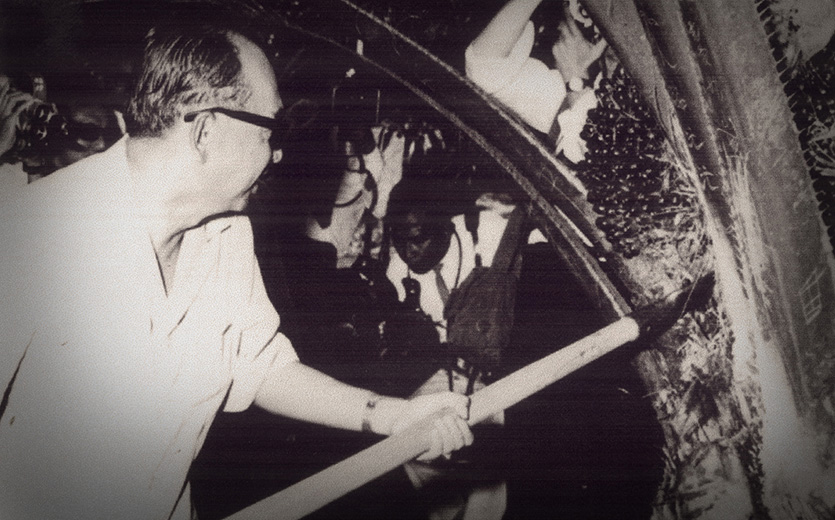 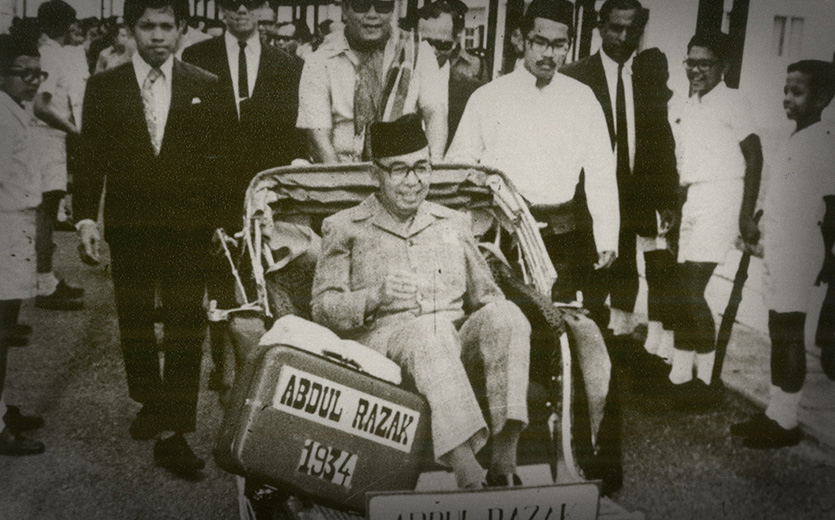 Biography
Tun Abdul Razak was born on 11th March 1922 in Pulau Keladi, Pekan, Pahang, and was raised by his grandfather who taught him traditional values and religion. Even though he was from an aristocratic background, he remained humble and down to earth ever since his days in school. For example, he chose to walk barefoot to school because he did not want to feel alienated from the rest of his friends who were unable to buy shoes. From young, Tun Razak realised just how backward and poor the Malays were under British rule, especially those who were living in rural areas. He, too, had experienced hardship during the Japanese occupation of Malaya. His observations and experience may have been his biggest motivation to change the lives and fate of his fellow people. In 1934, Tun Abdul Razak was selected by the Pahang Resident to attend Malay College Kuala Kangsar where his leadership skills would be honed. It was there that he learned to speak in English. In 1940, Tun Abdul Razak attended Raffles College, Singapore where there were only 15 Malay students at the time. His school days however, were interrupted when Japanese forces invaded Malaya. After the end of the 2nd World War, Tun Razak received a scholarship to study law in London. In 1950 he graduated as an Utter Barrister from Lincoln’s Inn. During his student days in England, Tun Razak was a prominent student leader of Kesatuan Melayu Great Britain (Malay Association of Great Britain) where he met Tunku Abdul Rahman. This friendship continued even when he returned to Malaya and it was Tun Razak who invited Tunku to contest for the position of UMNO President after Dato’ Onn Jaafar resigned. Through UMNO, Tun Razak fought against the Malayan Union and subsequently for independence from the British. In 1952, an alliance was born between the political parties of the Malay and Chinese community of Malaya, namely between UMNO and MCA (Malayan Chinese Association), resulting in a huge win in the Kuala Lumpur election. In 1955, Malaya’s first General Election was held; the Alliance Party, now joined by the Malayan Indian Congress (MIC) won 51 of 52 seats, proving to the British that they were trusted by the people. Tunku was appointed as the Chief Minister of the Federation of Malaya, and Tun Abdul Razak became the Minister of Education. After Malaya gained independence from the British in 1957, Tunku became the Prime Minister of the Federation of Malaya, and Tun Abdul Razak was appointed as the Deputy Prime Minister. In 1970, Tunku Abdul Rahman Putra al-Haj stepped down and Tun Abdul Razak bin Haji Dato’ Hussein al-Haj became the 2nd Prime Minister of Malaysia. His tenure as Prime Minister brought progress and development to Malaysia, especially in areas such as the rural economy, international relations, education, and unity.
Death
In 1969, Tun Abdul Razak was diagnosed with leukemia and was only expected to live for two more years. However, he continued his work as Deputy Prime Minister and later the Prime Minister of Malaysia. His illness was kept secret even from his family, friends, colleagues and the people. “My father really wanted to live longer – there were still so much he needed to do. Being the Prime Minister and taking care of the rakyat while suffering from the illness must have been very hard on him. He must have had an extraordinary spirit to face all that,” said his son, Datuk Ahmad Johari Tun Razak. On 14th January 1976, Tun Abdul Razak passed away at a hospital in London. He was laid to rest at the Heroes’ Mausoleum (Makam Pahlawan), Masjid Negara, Kuala Lumpur beside his close friend, Tun Dr Ismail bin Abdul Rahman. May he rest in peace. His legacy continues through his wife, Tun Rahah, and their sons, Dato’ Seri Najib Razak, Datuk Ahmed Johari, Mohamed Nizam, Mohamed Nazim, and Mohamed Nazir.
Chronology
Contributions

Education
In 1955, Tun Abdul Razak was appointed as the Minister of Education. As the Minister of Education, he formulated the National Education Policy through the Razak Report 1956. The report was announced on 16th May 1956, and was drafted with the objective of changing the way students learn. Some of the issues included in the report were the standardisation of the syllabus in all schools across the country, using Bahasa Malaysia as the medium of learning in all educational institutions, and promoting racial harmony from pre-school. He also ordered the construction of more than 3,000 schools and enabled more than 3 million illiterate adults to read and write through special classes in rural areas.

Economy
In less than 6 years that Tun Abdul Razak became the Prime Minister of Malaysia, the country experienced high rates of growth. The New Economic Policy which was introduced in 1971 had the objective of eradicating poverty, and restructuring society to overcome economic imbalance. He and “the 2nd generation politicians” saw the need to close the socio-economic gap between races, especially after the racial riot of 13th May 1969.

Under his leadership, the country saw the rise of Bumiputera involvement in the economic sector especially with the establishment of agencies such as Majlis Amanah Rakyat (MARA) and PERNAS, first proposed by the Bumiputera Economic Congress.

Rural Development
Tun Abdul Razak was especially concerned with rural development. He recognised the importance of socio-economic balance where everyone can contribute to, and benefit from, the country’s progress. He is known as Malaysia’s Father of Development due to his policy emphasis on rural and agricultural development.

One of his many innovations was the introduction of the Green Book, launched on 20th December 1974. The Green Book contained plans and guidelines for proper use of lands, short-term plantations, livestock, fresh water fish farms, markets and other small projects. The purpose of the Green Book was to increase the supply of food supplies for the whole country, generate income for rural folk as a method to control inflation, and encourage cooperation among citizens, their representatives, and government officials.

Prior to that, in 1960, Tun Abdul Razak launched the Red Book which contained development plans for every district. This book was made available at every State and District Operations Room nationwide as guidelines for government officials in their effort to develop rural areas. This includes plans for roads, drains, mosque, clinics, adult classes, telephones and much more. Through this effort, the Federal Land Development Authority (FELDA) was established.

International Relations
Malaysia’s foreign policy under Tun Razak was a continuation of its domestic policies which focused on maintaining security and peace, economic strength, and other national interests. Under Tun Abdul Razak’s leadership, Malaysia shifted to a non-aligned policy and joined the Non-Aligned Movement in 1970. The country’s foreign policy shifted from a pro-Western one to neutral, where the country would maintain good relations with all countries regardless of ideologies. He also initiated diplomatic relations with China, and Indochina countries, and increase cooperation with ASEAN countries. At the same time, he stressed the importance of the ‘Zone of Peace, Freedom, and Neutrality’ (ZOPFAN) as well as the South East Asia Nuclear Weapon Free Zone (SEANWFZ). It was also during his time that Malaysia became a member of the Organisation of Islamic Cooperation (OIC) and recognised as an Islamic country.

Selected Quotes & Speeches
“Sebagai satu bangsa yang muda dan sedang membangun, kita berada pada saat dan waktu yang penting oleh kerana inilah masanya kita menentukan bentuk dan corak kebudayaan Malaysia yang bakal diwariskan kepada generasi akan datang. Dalam hal ini, kita sudah pun mempunyai garis-garis panduan yang nyata iaitu kebudayaan Malaysia hendaklah berlandaskan kebudayaan rakyat asal rantau ini. Saya ingin hakikat ini difahami betul supaya tidak lagi timbul keraguan atau kebimbangan pada mana-mana pihak pun.” – August, 1973 “Economic democracy means the good things of life must be made available to more and more people and gross inequality and imbalances between the rural and urban people should be removed.” – Launching of the 2nd Phase of the Rural Development Programme, 4th September 1961 “A free Press is and should be a watchdog for democracy. But because the Press has this special character, it also carries tremendous responsibilities. The public has a right to expect in a democracy that the Press not only should present its facts freely, but also fairly. Nothing can be more disturbing in a democracy than wild rumours, partial truths, or unfounded allegations.” – Kuala Lumpur. 23rd October 1961 “In a nation of sensible people such as Malaysia, with good government and good political leadership, it is not so much what matters on the front stage; what’s more important is the hard work, sound thinking, and action which is carried out back stage.” – 24th July 1965
Additional Material