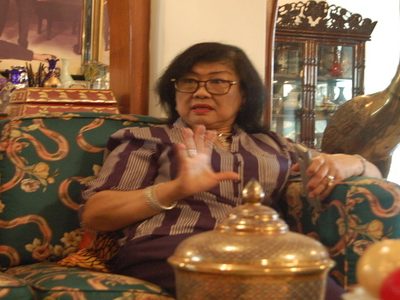 Tan Sri Rafidah Aziz holds a Bachelor of Arts degree in Economics and a Master's degree in Economics from the University of Malaya. She is Malaysia's longest-serving Minister of International Trade and Industry, having served in that capacity from 1987 to 2008. Prior to this, she has also held the portfolio of Minister of Public Enterprises from 1980 to 1987 and Deputy Minister of Finance from 1977 to 1980. Tan Sri Rafidah was also a lecturer at the Faculty of Economics and Administration at the University of Malaya between 1966 and 1976. She now serves as an Adjunct Professor at the College of Business, Universiti Utara Malaysia.

She has received various awards from the states of Selangor, Perak, Melaka and Terengganu as well as from Argentina and Chile. She has also been conferred Honorary Doctorates from Universiti Putra Malaysia, Universiti Utara Malaysia, Universiti Tun Razak and the Dominican University of California, United States of America. She also serves as Chairman of Megasteel Sdn Bhd and Pinewood Iskandar Malaysia Studio and is the patron of several NGOs.

The following excerpts are from a recent conversation Perdana Leadership Foundation had with Tan Sri Rafidah Aziz as part of our Oral History project.

Tan Sri Rafidah’s greatest fear for Malaysia is the erosion of trust. She is also concerned about the increase in polarisation. However, she has great hope in the young. This is the era of the millennials, she declares, and it is the young who can steer the country back to the right path.

Tan Sri Rafidah cites the example of Singapore, which is a smaller country than Malaysia but one that has set very high standards for itself. She speaks of her respect for the late Lee Kuan Yew and how she still visited him even after he retired. Rafidah says she learned from Singapore’s example the importance of depoliticising important issues.

Tan Sri Rafidah talks about her career, starting off as a lecturer who had a radio show and newspaper column. She then recounts her rise within UMNO in the 1970s and about how she entered the government, eventually becoming MITI minister. She says she is not a politician but a technocrat in politics.

Tan Sri Rafidah talks about her childhood which she describes as “adulthood at a very young age”. She also talks about how she pestered her father to be allowed to take English lessons, and she recounts the various lessons she learned in life through the various schools she attended.