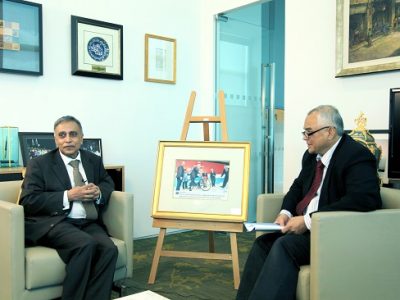 Tan Sri Nor Mohamed Yakcop is the Deputy Chairman of Khazanah Nasional Berhad, the Government of Malaysia’s strategic investment arm. He is also the Chairman of the newly set-up Khazanah Research Institute, which, inter alia, aims to provide critical and objective policy input for Malaysia’s continued growth and development. He was previously the Minister of Finance (II) from April 2004 to April 2009 and Minister in the Prime Minister’s Department responsible for the Economic Planning Unit from May 2009 to May 2013. Tan Sri Nor Mohamed also served as Special Economic Adviser to the Prime Minister, Tun Dr. Mahathir Mohamad from May 2000 to end of 2003. One of Tan Sri Nor’s most significant achievements was assisting the Prime Minister in the implementation of Unorthodox Measures, including selective exchange control measures, to overcome the 1997 / 1998 Asian Financial Crisis. The decisive and bold actions by the Government ensured that Malaysia, not only survived without any assistance from the IMF or World Bank, but also emerged stronger after the crisis.

Tan Sri Nor Mohamed was with the Central Bank of Malaysia from 1968 to 1994 and again from September 1998 to April 2000. Whilst in the Central Bank, he played a key role in the development of Islamic finance in Malaysia, including the Islamic pawn broking system (al-Rahnu). He was also responsible for the setting up of the Securities Commission and Malaysia’s first rating agency (RAM). Tan Sri Nor Mohamed received his Bachelor of Economics (Honours) degree from the University of Malaya in 1972 and M.B.A. from Catholic University of Leuven, Belgium in 1979.

Tan Sri had kindly given us four hours of his time for our Oral History project. We present below excerpts from our conversation with him. The transcript of this conversation will be published soon.

Tan Sri Nor Mohamed Yakcop says the widening income gap between the rich and the poor is a major concern of his. In his time, social mobility from one class to another was possible. He fears that it is no longer possible now. He says that 30 years ago, if you asked anyone if their children would have a better life, the answer is of course. But today, that is no longer the case. He thinks it’s important that leaders provide a clear vision for the future and stick to it without getting distracted. His greatest wish is for the country to continue to prosper.

Tan Sri Nor Mohamed Yakcop advises young people to learn skills, even if they are blue collar skills as there is demand for that. Secondly, he says don’t lead an extravagant lifestyle that will result in falling into debt. He also shares several of his favourite philosophies, namely: always do your best and don’t worry too much about the results; choose your battles, go for the ones you can win; and lastly be brave and do what’s right rather than what’s popular.

Tan Sri Nor Mohamed Yakcop about the interest that the EU and USA have in ASEAN. He notes that their investment in this region is bigger than India and China combined. But he feels ASEAN must do more, in particular promote regional champions, companies that can grow bigger and operate regionally. He says each country must promote its own champions and other countries in the region must accept these champions as well.

The Singapore railway land issue had been in limbo from 1990 to 2010. Since Malaysia was not making money from it, Tan Sri Nor Mohamed Yakcop successfully negotiated a deal whereby Malaysia would surrender the lease of the land in return for investments in some choice properties in Singapore and with Singapore agreeing to invest in the Iskandar region in Malaysia.

After the 1998 crisis was resolved, Dr Mahathir invited Tan Sri Nor Mohamed Yakcop to work for him as his economic advisor. Among the things he did was shake up the management of key government-linked corporations like MRCB (which owned TV3), UEM and Renong and saved those companies from going bankrupt. He describes his role as a “reality checker” for Dr M.

When the Asian Economic Crisis first hit the region, Tan Sri Nor Mohamed Yakcop was working in the private sector. Dr Mahathir invited him to accompany him on a working trip to Argentina. While there, he explained to the PM what was happening with the crisis. Dr M subsequently tapped on him to cook up the unorthodox measures to tackle the crisis.

One of the first decisions Tun Dr Mahathir made when he became prime minister was to look into the possibility of setting up Islamic banking. Tan Sri Nor Mohamed Yakcop wrote a paper “The Establishment of Islamic Banking in Malaysia” in 1981 and by 1983, Bank Islam Malaysia was established. He credits Dr M for having the bravery to implement Islamic banking in Malaysia.

Tan Sri Nor Mohamed Yakcop recalls his early days where he considered being a lawyer but was subsequently advised by a MARA officer to study economics. He joined Bank Negara on Sept 16, 1968 as a clerk recording staff leave. He later got a Bank Negara scholarship to do his Masters. After he returned he worked in the Money Markets & Forex Department of Bank Negara.