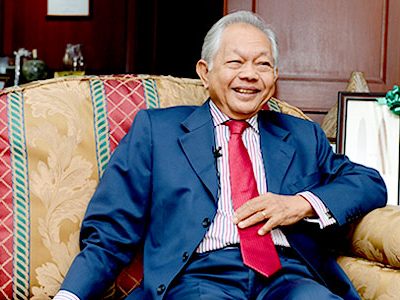 The podcast episodes are excerpted from the Foundation's Oral History interviews with him.

Tan Sri Leo Moggie says Malaysia has always been known as a place where people from various communities can live together despite their differences. He shares his concerns, namely the rise of a small group of people who want to impose a narrow view of things. He is also concerned about whether Malaysians are getting educated correctly and the need for the mastery of English. Lastly, he wants to see a reduction in the divide between the rich and poor; some form of affirmative action is needed. He is optimistic about the common sense that most Malaysians have. He also feels that the Malays, as the dominant community in this country, must take the lead in making others feel accepted in Malaysia.

Tan Sri Leo Moggie says that in the 1970s, provisioning of infrastructure was the main focus of the Energy, Telecommunications and Posts Ministry. He says that the efforts were largely successful and by 1979, most rural areas had electricity. The 1980s was the era of privatization and he recounts how the government corporatised several key utilities. In the 1990s, we saw the emergence of the Multimedia Super Corridor, which was the government’s plan to attract IT and high-tech investments into the country.

Tan Sri Leo Moggie recounts his initial foray into politics in the 1974 elections where he was asked by the then-Chief Minister to stand for Barisan Nasional. He declined and instead ran for SNAP, which was then an opposition party. His maiden speech in Parliament caught the attention of BN leaders who asked his party to consider joining the BN, which came to fruition in 1976. After the 1978 elections he was made a federal minister.

Tan Sri Leo Moggie talks about his humble beginnings and his early days attending Catholic missionary schools in Sarawak. He later got a Colombo Plan scholarship to study in New Zealand. While as a student there, his political consciousness was stirred by events such as Sarawak joining the Malaysian Federation and the Vietnam War. He was president of the Malaysian Students’ Association and was also very active in the International Students’ Association.