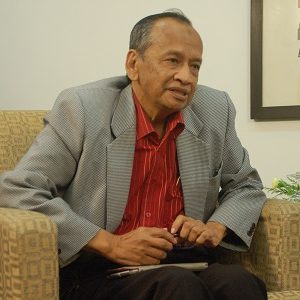 Perdana Leadership Foundation was privileged to be able to converse with our former Auditor General, Tan Sri Ambrin Buang, as part of our Oral History series. During the dialogue, Tan Sri shared with us his humble beginnings and how he entered government service. He has strong opinions on the role of an auditor, especially within the public sector, and the importance of personal ethics and integrity. Below are excerpts of our conversation with him. The full manuscript of the conversation will be published soon.

Tan Sri Dato' Setia Ambrin bin Buang is now the Chairman of BIMB and has been appointed head of a special investigation committee on procurements, governance and finance. Tan Sri Ambrin was appointed the Auditor General of Malaysia on 22 February 2006 upon his retirement after having served the Government (Malaysian Civil Service) for over 35 years. He completed his tenure as Auditor-General of Malaysia on 22 February 2017. His working career includes experience in the Ministry of Trade and lndustry from 1971 to 1982 and was appointed as Deputy Director, Small Scale Industries Division in 1981. He had also served in Malaysian Timber lndustry Board from 1982 to 1987 and National Institute of Public Administration from July 1987 to 1991.

Tan Sri Ambrin had also served at the Malaysian Embassy in Tokyo, Japan from 1992 to March 1995 as Minister for Economic Affairs and Deputy Head of Mission. He was a Senior General Manager for the Kuala Lumpur International Airport Berhad from April 1995 to February 1999 and the State Secretary of the Selangor State Government from March 1999 to September 2001 and Secretary General of the Ministry of Education till his appointment as Auditor General. On 16 May 2016, Tan Sri was conferred the Honorary Doctorate Award which carries the title Prof. (Dr.) by IIC University of Technology, Cambodia. He is formerly a board member of the Malaysian lnstitute of Integrity and a member of the Selangor Royal Chamber.

Tan Sri Ambrin talks in general about what it means to do auditing. Then he goes into detail about his experience auditing 1MDB, saying it is very challenging because so many offshore shell companies were involved. He found it most peculiar that a company of that size would dismiss two professional auditors. He also questions how a company could amass so much debt so quickly. With regard to the interim report that he prepared, he explains it was classified under the Official Secrets Act at the request of the PAC. It wasn't a decision he himself made.

Tan Sri Ambrin talks about how he ended up working for the government. He recounts his experiences working for Tun Dr Ismail and Tun Hussein Onn. He also talks about how he considers it a great honour to be hand-picked to become Auditor General by then-Prime Minister Tun Abdullah Ahmad Badawi. Ultimately, when it comes to auditing he says you should fear God more than the Auditor-General.